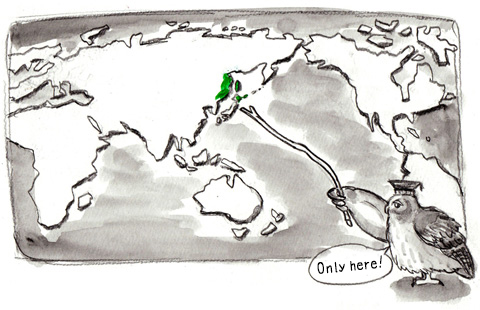 The Japanese name apparently means owls living in the island (i.e., Hokkaido). It lives also on Kunashiri, Etrofu, and Sakhalin islands. Some subspecies live in the border areas between Russia and China. 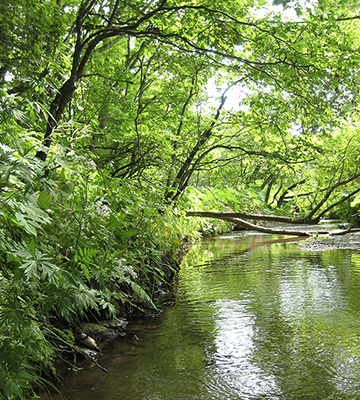 Fish owls do not inhabit isolated mountains and valleys, but live in proximity to humans. The Ainu people, Hokkaido’s indigenous people, showed their respect for the fish owl by calling it kotan kur kamuy ‘guardian deity of the village’. It is important to understand and respect their way of living so as to protect them. 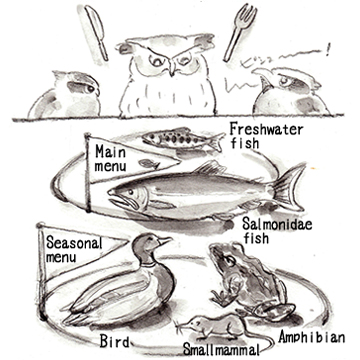 Fish owls. As the name says, they are owls that mainly eat fish.

In rivers on Hokkaido, we can see a lot of small and middle-sized fish belonging to the family Salmonidae such as Japanese char or cherry trout. In the fall and winter, pink salmons and chum salmons come back from the sea to the rivers.

But in the winter, many rivers freeze over, making it difficult to catch fish. When that happens, fish owls often come out to the sea shores to fish. Otherwise they may hunt mice or birds in forests or near houses. In the early spring, they eat Ezo brown frogs, which come to Hokkaido en masse to spawn. 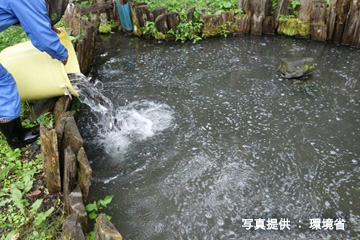 The population of fish in the rivers is decreasing as the environment of the rivers has changed due to straightening of their courses, logging of shade trees on river banks, and installation of dams without fish ladders, hampering their swim upstream.

Deprived of their staple diet, fish owls cannot survive. Since the decreased population of fish cannot easily increase, artificial feeding ponds are dug near the forests where fish owls live, and cherry trout are released there for the fish owls to catch. With their food supply secured, they will not die out or immigrate elsewhere. Although this is not their original, natural feeding habit, it is necessary as an emergency measure in order to help them find food. 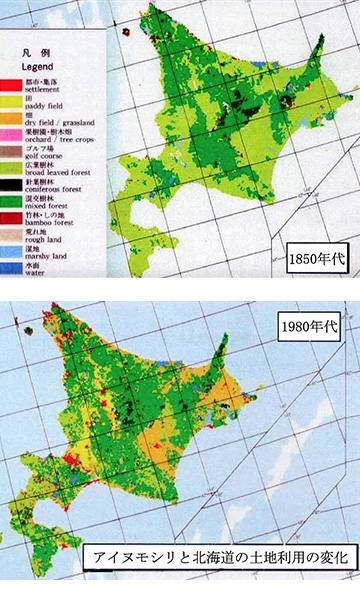 Transformation of the environment in Hokkaido

Why has the fish owl population decreased so much?

The picture to the left shows Ainu Moshiri in the 1850s, right before the colonization of Hokkaido, launched by the Japanese government during the Meiji period. For comparison, the picture below shows the evolution of land utilization in modern Hokkaido in the 1980s.

Ainu Moshiri means ‘a still earth for human beings’, that is, Hokkaido, in the language of the Ainu.

These images show that in just over 130 years the hardwoods connecting flat lands and forests have been entirely turned into farm lands. Water gradually gathers from high mountains to form rivers, and the streams get larger as they run towards the lowlands. River banks used to contain nutritious soil with thriving trees and many organisms living on them.

Fish owls are also one of those living there. Their staple food is fish. They survive eating other organisms as well including insects or small animals. Environments with diverse organisms enable them to stay alive.

Originally such environments are formed by trees growing along rivers, which are known as riparian forests. Fish owls do not inhabit isolated mountains and valleys. Their territories are the riparian forests and the surrounding environments, where they can eat and live. The hardwood forests which have been lost are the very places where fish owls used to live. The number of nesting trees, especially large ones, has sharply decreased. With this sharp decrease of riparian forests capable of supplying rich nutrients to rivers, the natural form of rivers has changed, and there are many fewer rivers where fish, the staple food of fish owls, live. Large-scale developments prioritizing human society have resulted in the loss of many forest belts with hardwoods.

Recent human history has had a huge impact on the entire ecosystem. The abnormal proliferation of Ezo Shika deer, which have inflicted massive damage to agriculture in recent years, is an example of what can happen when balance is lost in the ecosystem due to the reduction of forests.

Even children learn in environmental education: “If you cut too many trees, the earth gets terribly hot right?” A lot of people know about it.

For fish owls, nesting boxes and special feeding ponds stocked with fish are installed under the supervision of the Ministry of the Environment. These “shelter” and “rations” are nothing but temporary supportive measures, until green corridors are restored and consequently fish come back to rivers.

Nowadays more individuals, fishery cooperatives, agricultural cooperatives, local governments and corporations are involved in reforestation across Hokkaido. The existence of forests used to look irrelevant in the distance, but in fact it is closely related to our lives. We hope that the circle of people who accept and act on this principle continues to expand, and takes in future generations as well. 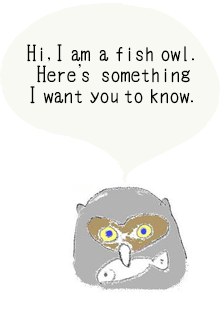 With a little help from you, our future is bright. It is good for your future, too. So let’s all pitch in!

● Don’t chase after us when you find us in forests!
Just as you feel relaxed in your home, we also want to do so. The forests are our home.

● Stop littering today!
Be aware that anything you throw out is like a murder weapon to us and can actually kill some of us.

● Absolutely do not dump hazardous materials in mountains or rivers!
They say the soil gets dirty, it runs down in rivers, pours into the sea and causes ecosystem collapse. Even if you dump something far away, it will eventually return to you and the result is difficult to repair.

● Drive slowly where flags are hung along rivers! 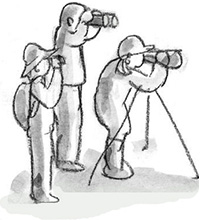 When you find us, please watch us quietly from a distance.

We ask you not to come close to trees with nesting boxes. Especially between January and June, when we fish owls struggle to raise our young, we get very nervous from just seeing you nearby. Please consider this so that we can concentrate on raising our young. 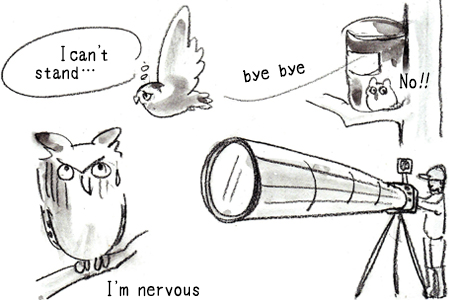 Please don’t stay long near our nests or feeding ponds or within our territories to take pictures of us.

We are very sensitive organisms, even though we look laid-back. We feel targeted and get scared when a long telephoto lens is turned towards us, even from a distance. The more sensitive of us may even leave our eggs or hatchlings behind. 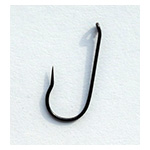 We ask a favor of those who do recreational fishing. Please practice catch-and-release, putting the fish you catch back into the river. Fish are our vital food.

Please use barbless fishing hooks so that fish can regain strength after they are released. Please use these tools that require high-level game-fishing skills, and enjoy yourself fishing in the middle of the nature.

Rivers populated by lots of fish are attractive to you fishermen and to us alike. Please practice catch-and-release to make sure the rivers always have fish.

We only eat a small amount of fish, by the way—we’re not competing with you.

You can threaten them without knowing it.

People sometimes approach too close to owls or enter their habitat during breeding season, whether out of curiosity or in an attempt to get a picture. This can have the unintended consequence of forcing fish owls to leave the safe havens they worked so hard to find, which can then lead to them being killed on roads while searching for new breeding areas.

To build an environment where the number of precious adult birds won’t decrease anymore and young birds can feel safe.


Fish owls stand at the top of the eco-system, which means protecting them leads to protecting ourselves and the environments we live in. Even small actions have huge power when we all work together. We sincerely ask you for your support and cooperation.

Support the future of fish owls